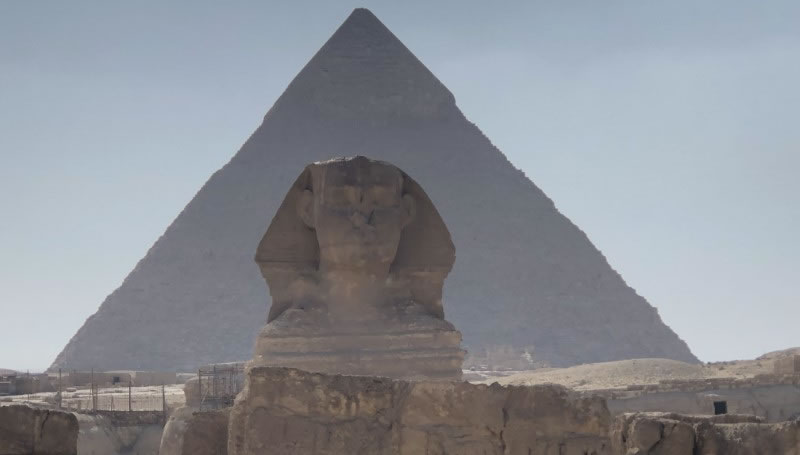 Like most people, Egypt has always been on my bucket list, a kind of “mythical” place that you have to witness first hand before you believe the stories about it.

Our first view of the great pyramid of Giza was the moment it all became real for us. We turned the corner into the street where our hotel was and there, looming much larger than anyone anticipated, was the 140 metre tall ancient monument. We couldn’t wait to start touring and learn more about the wonders of this ancient place.

Our first day of touring started with a visit to one of the oldest pyramids in Egypt, the step pyramid of Saqqara, it is quite surreal walking on the same stones that the ancient Egyptians walked on, nearly 5000 years ago. This was also our first glimpse of hieroglyphs on the walls of one of the early pyramids, it is quite astonishing to think that these images are thousands of years old but some are in such good condition, they look like they were painted last year.

Our day trip continued with a visit to Memphis, the original capital city of ancient Egypt. Here we saw our first sphinx and the enormous colossus of Rameses II, quite spectacular to view such incredible craftsmanship. Lastly we visited the Giza pyramid complex, spending time at the great pyramid and the sphinx. The experience of seeing these ancient treasures in real life, being able to walk up to the pyramids and touch them and see the marks left in the stones by thousands of years of weathering was an incredible privilege, it is impossible to describe the feeling that one gets when you are in the presence of these antiquities, but it is almost supernatural.

The following morning, we made our way through the bustling city of Cairo, back to the airport for our flight to Luxor, the next stop on this wonderful journey. Luxor is famous for the temples of Karnak and Luxor and the almost 3 km long, avenue of sphinxes that links the two temples. Once again, the sheers scale of the buildings, the size of the pillars just leaves you in awe as to how an ancient civilisation was able to build these places, using very basic tools and technology.

Luxor was also the starting point of our 4 night Nile cruise to Aswan, but before we departed on the cruise, we headed for the West Bank to the Valley of the Kings. It seemed, every time I thought that something couldn’t enthral me more, the next sight I saw did just that. The Valley of the Kings is an ancient burial ground, where Pharaohs and nobility were buried in tombs, carved out of solid rock. The Valley of the Kings was used over a 500 year period between the 16th and 11th centuries BC. The Tombs range from a very basic hole in the ground to elaborate tombs with 120 rooms, fully adorned on floors, walls and ceilings with relief carvings of Egyptian hieroglyphs. There are 63 tombs that have been discovered so far, but there may still be more, buried deep beneath the mountain. The Valley of the Kings is probably most famous for the discovery of king Tut’s (Tutankhamun) tomb, a completely untouched and undiscovered tomb.

On our way back the cruise boat, we stopped at the Temple of Hatshepsut, one of the few female Pharaohs of Egypt. Again, the scale of the construction made me feel like the whole place was built by giants.

We arrived back on board and without delay, we were on our way. The entire time during this trip, I felt like I was an actor in a Hollywood movie about Egypt, because everything was like it was in the movies, the people, the places and now, here we were, cruising down the Nile on a cruise boat, lazily drifting past people going about their daily lives on the banks of this ancient river. Swimming, fishing, growing crops, existing as they have done for thousands of years and we have a grandstand seat to it all.

The cruise boat was very pleasant, the room was cosy but functional and air-conditioned, the top deck was the place to be, her you could enjoy an ice cold (but very expensive) beer and watch the world go by.

On day 2 of the cruise we stopped at Edfu where we took an “interesting” horse cart ride to the temple, another beautiful, well preserved and restored example of ancient Egypt. From Edfu, we continued our journey, stopping at Kom Ombo to view the double temples, one dedicated to the crocodile God, Sobek and the other dedicated to the Falcon God Horos. The sun was setting as we boarded and slowly continued on our way, looking back, the temples were bathed in the most amazing late afternoon light.

Aswan is as far as you can go on the cruise before you run into the Aswan dam, so this is the disembarkation point, but certainly not the last of the antiquities. Aswan is famous for its quarries, and the location where much of the stone for the ancient temples and artefacts was sourced. One of the most spectacular sites is the unfinished obelisk, a 42 metre long monolith that was carved out of the granite bedrock. It was commissioned by Queen Hatshepsut but was never finished, as it developed cracks before it was completed, it would have been the largest Obelisk in Egypt and weighs over 1000 tons.

While in Aswan, we also enjoyed a tour of the temple of Philae, (like Abu Simbel, this temple was relocated when they built the Aswan low dam). Our Aswan stay was topped off with an afternoon felucca cruise on the Nile, and a walk around the botanical garden on Kitchener Island.

Our next stop was Abu Simbel. We took a quick flight from Aswan to Abu Simbel airport, then a short bus ride to the temple. It was fascinating to see just how meticulously the temple was moved from its original site, to its current location to prevent it from being flooded with the construction of the Aswan High Dam.

For the last part of our journey, we returned to Cairo where we visited the market and the famed Cairo museum, filled with hundreds of thousands of artefacts from this remarkable country. Egypt truly is a must see destination that offers far more than you expect.