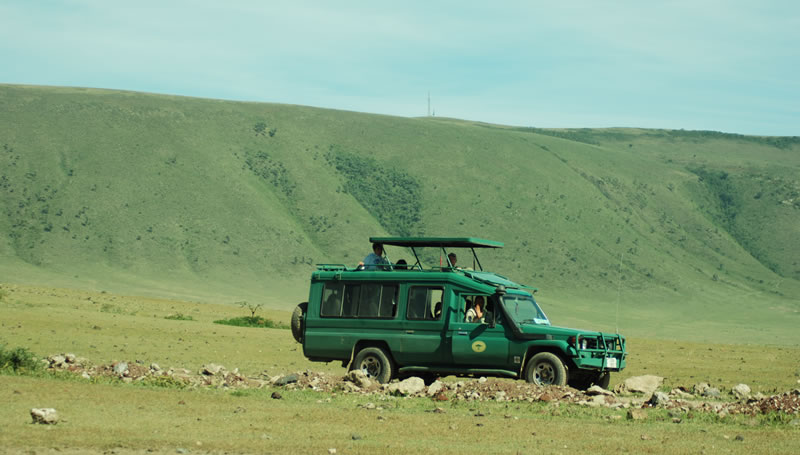 The Ngorongoro Crater is one of the most fascinating conservation areas in Africa. Located in Tanzania, East Africa, it was created approx. two to three million years ago after a large volcanic explosion and collapsed on itself, creating the world’s largest unfilled caldera.

The Crater is 610 metres deep and covers a distance of 260 square kilometres, and 2440m above sea level. It is formed in a circular depression, which are 21km along the east-west axis and 18km along the south-west axis.

There are several features in the Crater region, including Oldeini Mountain, 3118m high found along the southern part of the Ngorongogo Range, and Sadiman Mountain which is 450m high and is a deeply eroded volcano. On the Crater floor, Lake Magadi, a wetlands offering a great presence of Flamingos when in season. There are some smaller swamp areas where Hippo can be found as well.

There are a few options when it comes to accommodation in the Crater region. There are several guest houses, lodges and camps in the nearby Coffee growing plantations village of Karatu. It is an approx. 3 hr drive from Karatu via the Main Headquarters and following the rim of the crater to then access the crater floor.

We stayed at The Plantation Lodge, just outside the village of Karatu. It is located 12km away from the Ngorongoro Conversation area, elevated at 1600m above sea level, and is 35km away from The Lake Manyara National Park. This lodge featured all private facilities with very spacious rooms, dining and leisure facilities, and is located on landscaped gardens and overlooking coffee plantations.

There are also options where you can actually stay around the rim of the Crater itself, which then allows shorter travel times to and from the Crater Floor to allow the entire day on a game drive.

Our experience commenced with a one hour drive to the National Park headquarters where our guide Peter would complete the necessary permits to allow us to enter. Here we could see how many others tourists were here as it was a very busy place! Once through the gate, the drive continued west as we followed the rim of the crater. We did come to a lookout which gave an exceptional view of the Crater floor and wall.

Another hour of driving around the Crater until we reached a second checkpoint gate, where we then commenced the steep decline down the Crater rim to the Crater floor. There are several rules regarding the visit – the maximum speed is 25 km/h; there is no off-road driving permitted; the gates are open at 6am and all visitors must leave the Conversation area by 6pm; no camping is permitted; and you are not allowed out of your vehicle except in designated areas.

During our descent down, we were greeted with the first sighting of many – a Pride of Lions. This small pride is one of the five that live in the Crater. This pride were happily resting under a tree in the shade, a luxury in the Crater as the floor itself does not have much shade except for around the rim. There are no other big cats here – no Cheetah or Leopard – they both are extinct.

We followed the well-levelled gravelled roads throughout the Crater during the morning and discovered several sightings, including Zebra, Buffalo, Wildebeest, Warthog, Hyena and Black Rhino. We did pass one small lagoon with a large pod of Hippos submerged in the water with the occasional yawn! The larger Crater Lake was quite dry with no sightings of any Pink Flamingos.

As the morning progressed, we encountered two female Lions and as we were in the centre of the Crater Floor, these two seemed very hot and bothered and one of them decided to sit herself in the shade directly in front of a Land Cruiser that was travelling in the opposite direction! This was such a sight to see, as this Lion was very exhausted breathing heavily and the shade was a well-deserved relief. The other Lion was curiously walking around the several vehicles that had been forced to stop as a result!

All vehicles in the Crater will make their way to the designated picnic area, where there are rest rooms, parking and the ability to enjoy lunch. Here was a sight of so many other vehicles, and how busy the Crater can be.

The afternoon we continued travelling through the Crater and passing another Lion pride and pair of Black Rhino, before commencing our ascent out of the Crater Floor to return to Karatu. During our exit of the Crater, we made a brief stop at the Ngorongoro Sopa Lodge, positioned 500m above the Crater Rim, providing excellent views of the Crater Caldera. This Lodge features 97 rooms including private facilities with views over the Crater with large conference, dining and other leisure facilities.

That evening our stay in the Karatu Region was at The Manor at Ngorongoro. The cottage style rooms are positioned around lush green gardens, and overlooking coffee plantations and countryside. The Manor House features a full day spa, and a great variety of leisure facilities including horse-riding.

The Ngorongoro Crater region is a must-see attraction while in Tanzania. Please include this as part of your experience when visiting East Africa. Please also include on your itinerary other must-see highlights of Tanzania including Lake Manyara, famous for its Tree-Climbing Lions and the Manyara Treetop Walkway; The Tarangire National Park which boasts the largest populations of Elephants in Tanzania; seeing the highest mountain in Africa, Mt Kilimanjaro, standing at 5895m, and nearby Mt Meru, a mere 4562m; and finally completing the itinerary with a visit to The Serengeti National Park. The annual Wildebeest Migration does circuit the National Park during most of the year and for a good four to five months from November/December the Migration herds of Wildebeest and Zebra and following predators be found in the Lower Serengeti before migrating around March/April in seek of water and vegetation. Eventually the migration will cross the border into Kenya around June/July and enter the Maasai Mara, making their famous Mara River Crossing. The itinerary can include including highlights of Kenya, including a stay in the Masai Mara, Amboseli National Park and Lake Nakuru in the Rift Valley, famous for the Flamingos.