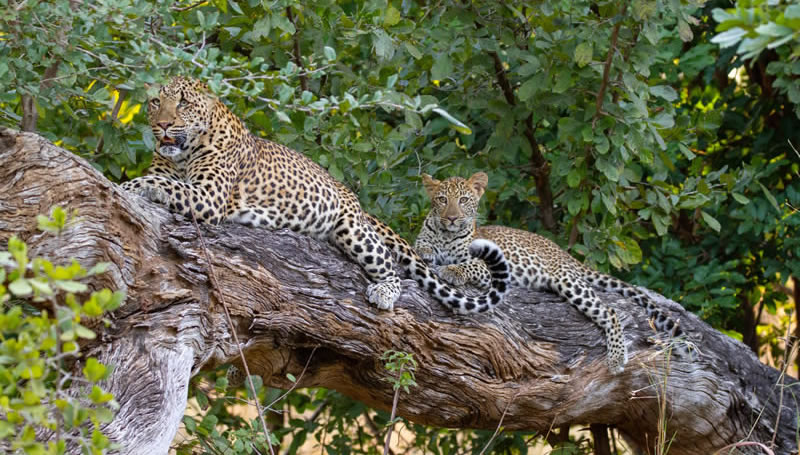 After an overnight in Lusaka at the Cresta Golfview Hotel, an early morning departure and short flight to Mfuwe (1hr, 10 mins) and our Zambia Photographic Safari has finally begun.

On arrival at Mfuwe, we were met and taken to Track & Trail River Camp, our base for the next 6 nights. This camp is located at a breathtaking spot on the banks of the Luangwa River overlooking the South Luangwa National Park. We then met Edward Selfe, our Photographic Host, who would guide us and provide photographic tips throughout our stay. A quick orientation and information session, then we settled in to depart on our first afternoon game drive.

A safari day began early with a morning wake-up call from the camp’s staff. We rose to the sounds of the bush beginning to stir. With this pre-dawn time (when the air is still cold and the bush sounds travel long distances) comes the promise of a new day on safari.

During a light breakfast served in the camp’s central area, we would discuss the morning’s safari, adjusting the plan as we gathered information from the bush around us.

Following breakfast, and usually before sunrise, we’d head out to make the best of the very early morning time, when the air was still and cool. Edward has been guiding in this national park for a long time and has developed an eye for the subtle behaviour of mammals that indicate predators nearby. While photos safaris are about much more than just predators, he was always keen to share the thrill of sensing, tracking down and then finding one of Luangwa’s carnivores. Moving slowly through likely habitats often revealed sightings such as a leopard who is coming to the end of it’s nightly routine and seeking a quiet refuge.

As the sun rises and develops its famous golden African colour, we followed the meandering river to watch for elephant herds crossing the water. Many of the Luangwa’s elephants cross the river on a daily basis in search of food; finding a herd mid-stream, bathed in morning sunlight, is a highlight for many visitors to this area. After they crossed, we’d spend time with the herd as they arrive on the bank, scanning through to play with photographic compositions, and photographing these massive browsers in their environment.

Throughout the morning, we’d continue our route through the bush, changing habitats regularly as our distance from the river varied. The Luangwa River meanders dramatically and provides a year-round water source for a huge density of herbivores, who in turn support a healthy population of lion, leopard and Hyaena. We also enjoyed regular sightings of Thornicroft’s Giraffe and beautifully-marked Crawshay’s zebra which fed along the valley’s many lagoons.

Equally abundant, but often overlooked, is the astonishing variety and abundance of birdlife in the valley. We saw large eagles, many species of vulture whenever there were carcasses to be cleared up, and along the waterways, there were storks, herons, bee-eaters and kingfishers. Much of the wildlife in the Luangwa system is very familiar with the daily arrival of safari vehicles and allow close approaches and wonderful viewing of natural behaviour.

But not to be forgotten is the scenery which is not only beautiful in its own right, but also a stunning backdrop for imagery of the inhabitants. The South Luangwa National Park is home to some of the most impressive stretches of the Luangwa river, offering wide, dramatic views. Just inland from the river are beautiful ox-bow lagoons, many of which hold water late in the season and become honey-pots for game. Tucked into sharp river bends are arching Ebony groves where elephants, antelope and baboons seeking refuge and access to sugary fruits.

When we’ve enjoyed the best of the morning’s viewing, we’d stop in a scenic spot for a morning break. We often had tea, coffee, cold drinks and some delicious home-baked refreshments.

As it started to get hot, we’d head back to camp for brunch, a siesta, swim and a bit of game-viewing from the verandah of our room or a shady chair on the river bank. Often we had Elephants coming into camp during the day, so the wildlife viewing never really stopped.

After a rest in the afternoon, we’d head out once again to explore the bush for the afternoon. The late afternoon sunlight is the holy grail for photographers, and we’d always hope for something special. We were rarely disappointed.

With memory cards full, we’d head back to camp ready for a scrumptious dinner that never disappointed, and made plans for the following day.

This really was a fabulous safari and photographic experience.